I’ve decided I can no longer support Facebook’s deliberate actions to create divisions in society by promoting hate speech, lies and extremists for profit.

I appreciate that when we use a free service we become the product and that collecting and using our data is part of the trade off but Facebook goes way beyond using data – often illegally. It facilitates illegal activities like child pornography and human rights atrocities, not accidentally but knowingly, and chooses to do nothing about it.

Most people are aware of the scandal of Cambridge Analytica.  The personal data of up to 87 million Facebook users were acquired via the 270,000 Facebook users who used a Facebook app called “This Is Your Digital Life.” By giving this third-party app permission to acquire their data back in 2015, this also gave the app access to information on the user’s friends network; this resulted in the collection of data of about 87 million users, the majority of whom had no idea that Cambridge Analytica had access to them.

Despite this incident, Facebook pays scant regard to safeguarding the data of its users and frequent data breaches are common.

These are some of the other reasons I’ve decided to move my businesses away from Facebook:

Creating dissent is a deliberate act

The Wall Street Journal recently published a report based on some internal investigations that Facebook did in 2018.

The Facebook team found that the algorithms they use to gain user attention & increase time on the platform are not bringing people together as they claim, they are driving people apart. The algorithms exploit the human brain’s attraction to divisiveness.

According to the Facebook internal report, “64% of all extremist group joins are due to our recommendation tools… Our recommendation systems grow the problem.” This was exactly the assertion of Facebook’s harshest critics and by acknowledging it, FB was admitting – at least to itself – that its policies were deeply flawed and seriously dangerous.

Far from changing things, Faceook did nothing and Zuckerberg doubled-down on his absurd assertion that he is not responsible for what appears on his site.

The Wall Street Journal summed up the issue like this… “Facebook is under fire for making the world more divided. Many of its own experts appeared to agree—and they believe Facebook could mitigate many of the problems. The company chooses not to.”

A “virtual walkout” by hundreds of Facebook employees protesting Facebook’s publishing of Trump’s wildly inappropriate posts that were widely interpreted as advocating violence is still not having much effect in changing policies.

Civil rights executives who spoke with Zuckerberg and Sheryl Sandberg said they were “stunned” by the “incomprehensible explanations” of Facebook’s editorial policies.

This goes way beyond harvesting data and accepting money from anyone who wants to publish whatever they like.

The Committee on Homeland Security sent this letter to Mark Zuckerberg in June 2020.

“There is a difference between being a platform that facilitates public discourse and one that peddles incendiary, race-baiting innuendo guised as political speech, for profit…You should decide which side you are on.”

Facebook Admits It Was Used to Incite Violence in Myanmar

The United Nations documented Facebook’s role in the genocide.
An article in The NY Times reports that Facebook failed to prevent its platform from being used to “foment division and incite offline violence” in the country, one of its executives said in a post  citing a human rights report commissioned by the company.

In 2018 the inquiry recommended that Facebook adopt a stand-alone human rights policy, establish formalized governance structures to oversee the company’s human rights strategy, and provide regular updates on progress made. So far, this has not been done.

The Daily Wire is a hard right news channel run by Ben Shapiro whose stated goal is “to unmask leftists in the media for who they are, destroy their credibility with the American public, and devastate their funding bases”.
His views are classically religious-conservative. He suggests that transgender people suffer a “mental disorder”; he opposes same-sex couples raising children; he has said that “Arabs like to bomb crap and live in open sewage.”

The Daily Wire has an undisclosed relationship with Facebook pages owned by Mad World News — a notorious site that exploits Facebook’s algorithm to promote racism & violence. Mad World News has built its Facebook Pages by exploiting racial bias, religious bigotry, and violence. They take old stories on incendiary topics, rewrite them, give them a new date, and let Facebook’s algorithm do the rest.
On June 19, 2020, Mad World News published an article about a “patriotoc family” waving a confederate flag on the side of the road who were threatened by a man with a gun. What they didn’t mention was that this was an incident from 2015.

On a per article basis, The Daily Wire received more distribution on Facebook than any other publisher. 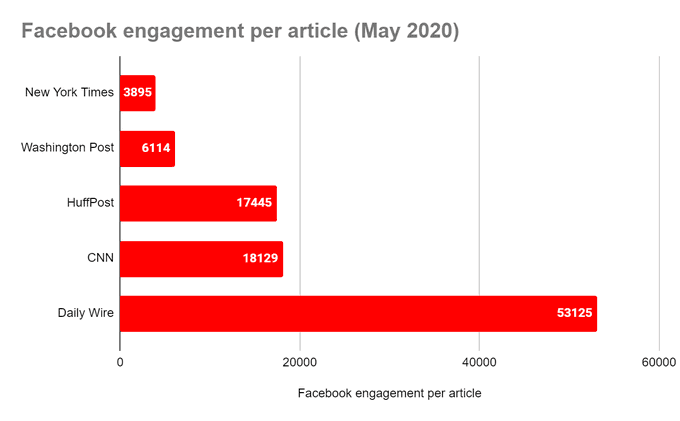 The Daily Wire was the seventh-ranked publisher on Facebook, according to the analytics service NewsWhip. Articles published in The Daily Wire attracted 60,616,745 engagements in May. Engagement is a combination of shares, likes, and comments, and is a way of quantifying distribution on Facebook.
The undisclosed relationship between Ben Shapiro and Mad World News violates Facebook’s rules. You are required to disclose when you are posting content for money. Facebook also bans “artificially boosting the popularity of content.”
Facebook says it investigated and found no violation of its rules. This isn’t the first time Facebook has chosen not to act against Shapiro.

We’re a tiny fish in this pond and we’re taking a stand more on principle and in support of our members than in any real hope of making a difference but what is interesting is that big advertisers seem to have got Facebook rattled at last.

There have been boycotts before but the brands generally don’t stay away very long. This time, the pressure for the boycott isn’t coming from consumers or marketing agencies, its coming from within the brands themselves – from their employees who are the ones suffering from the hate and violence.

Verizon is the latest company to join the boycott according to this article in The Guardian and there will no doubt be more.

Processing...
Thank you! Your subscription has been confirmed. You'll hear from us soon.